The Journey of A Federal Framework – PTSD 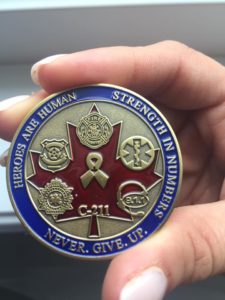 Changes and Implementations of Federal Policies and Legislation takes time, sometimes it can take years.  A disheartening fact but important to recognize when advocating for Mental Health initiatives for any geographical area or population.

600 days ago, An Federal Proposed Bill C-211 was born.  An Newly Elected Federal MP took on this Bill and brought it to life, of the reality, the hardships, the dedication, the challenges and the heartbreaking stories of First Responders, Correctional Officers, RCMP, Military and Veterans trying to overcome their Mental Health Injury – Post Traumatic Stress Disorder or now verbally known as Post Traumatic Stress Injury.  There is that heart wrenching reality that some who dedicated and sacrificed their lives for Canadians could no longer hold on to their pain and took their own life.

Death by Suicide is a very dark fact amongst Police Officers, Paramedics, FireFighters, Correctional Officers, RCMP, Active Soldiers, and Veterans. Stigma continues to be present not only in the public arena but at times within their own services.

So there was a very important job to do, and that was to have Bill C-211 a Federal PTSD Framework to come to light in the House Of Commons.  600 days ago the process of debates began.

For every Private Member’s Bill/Federal Proposed Bill – there are steps to take for it to be recognized of it’s importance.  Data and Statistical analysis begins, interviews, collaboration, listening to hours upon hours of traumatic and heartbreaking stories and then the debate (a tiered process) in front of all Federal MP’s to understand why this Bill weighed more than another.

For any Bill to move onto the next stage, they must pass all tiered process or as they call it in the House of Commons – Readings which they are three.  Bill C-211, passed 1st reading, the two parts of 2nd reading, the Health Committee, and as of Friday June 16, 2017, passed the 3rd and Final Reading. It now enters into the last phase before it officially passes from a Proposed Bill to a Legislative Bill.

Everyday a life is gone, Everyday someone puts on a uniform whether it be First Responders, Corrections, RCMP, Military or Veteran, and knows that their life becomes second to anyone they protect, serve and save.  It’s time to take care of them. It’s time to put them first.Federal-PTSD-Framework-C211